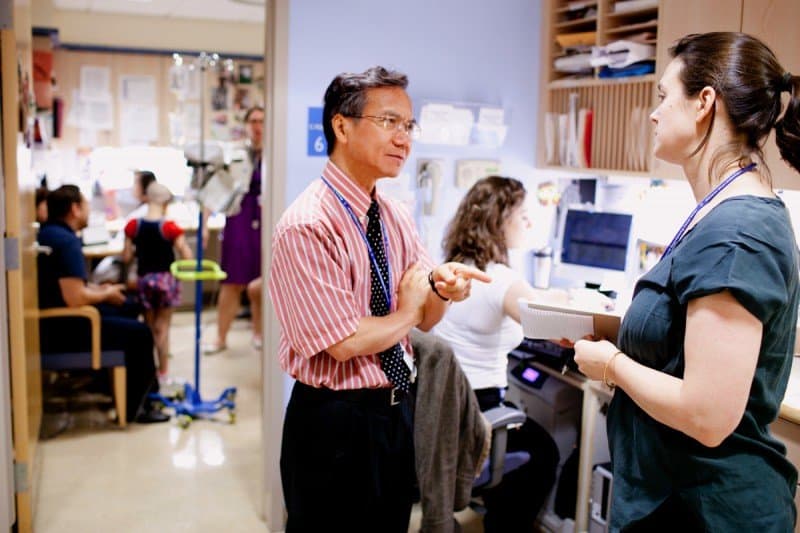 New York City, August 1, 2014 – On July 30, 2014 Aurora Ismaili, a 13 year old neuroblastoma survivor and a member of the Band of Parents, a nonprofit raising money for pediatric cancer research, presented Dr. Nai-Kong Cheung, Head of the Neuroblastoma Program at Memorial Sloan Kettering Cancer Center (MSK) with the second installment of a $2,000,000 collaborative grant. This is the largest pediatric cancer grant in the history of MSK by a parent organization.

Marc Winthrop, Chairman of the Band of Parents, said: “It is with great pride that we work so hard to support the neuroblastoma team at Memorial Sloan Kettering. We are thankful for their tireless efforts in trying to find a way to save our children.”

In March 2013, the Band of Parents, Inc. joined forces with the Isabella Santos Foundation, the Arms Wide Open Childhood Cancer Foundation, Inc., the Press On to CURE Childhood Cancer Fund, and the I Back Jack Foundation, Inc. to commit $2,000,000 to MSK. This grant will fully fund the GMP manufacture and clinical testing of a Hu3F8 bi-specific antibody targeted at neuroblastoma. Based on a previous trial’s finding, the Hu3F8 antibody has shown great promise as a delivery agent for drug treatments; during the trial, patients experienced more manageable side effects and were able to receive treatments more often providing a sustained anti-tumor response.

Based on a previous trial’s finding, the Hu3F8 antibody has shown great promise as a delivery agent for drug treatments; during the trial, patients experienced more manageable side effects and were able to receive treatments more often providing a sustained anti-tumor response.

About the Band of Parents:
The Band of Parents is a member-based organization with the goal of funding new therapies for neuroblastoma, a rare and deadly cancer that only strikes children. Our mission is to seek projects that have already been examined in the lab and are in need of support to rapidly move into a patient population within 12-24 months of funding.

About MSK:
Memorial Sloan Kettering Cancer Center — the world’s oldest and largest private cancer center — has devoted more than 130 years to exceptional patient care, innovative research, and outstanding educational programs. Today, we are one of 41 National Cancer Institute–designated Comprehensive Cancer Centers, with state-of-the-art science flourishing side by side with clinical studies and treatment.

About Neuroblastoma:
Neuroblastoma is the most common cancer in children under two years of age and is diagnosed in about 700 children in the United States each year. Neuroblastoma often appears as a tumor in the chest or abdomen and attacks the sympathetic nervous system. In two-thirds of cases it goes undiagnosed until it has spread (metastasized) to other parts of the body. Once neuroblastoma spreads, it is often considered a high-risk disease with a five-year survival rate of just thirty percent. The cause of neuroblastoma is unknown.