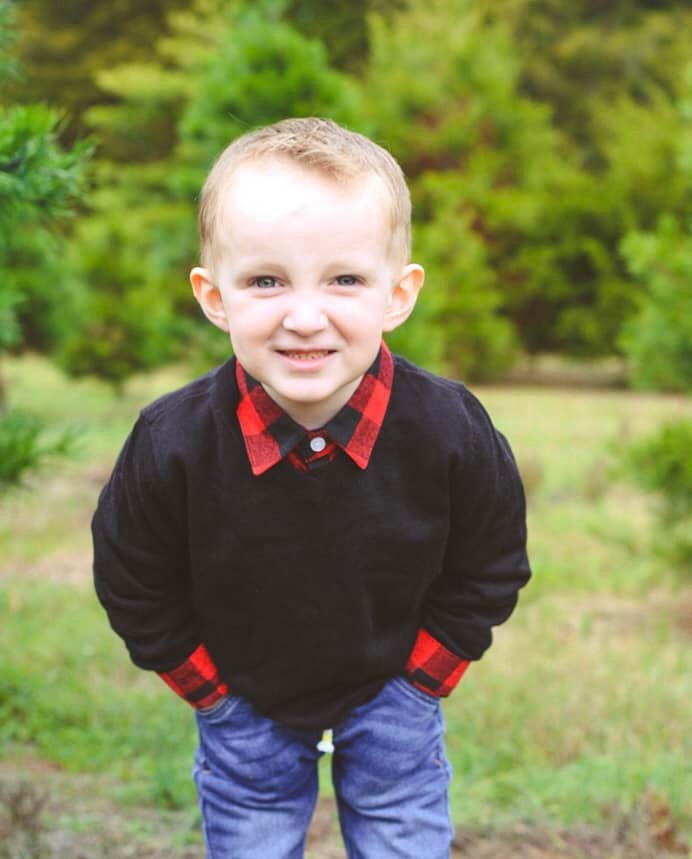 Our son Luke was diagnosed with stage 4 high-risk neuroblastoma at 20 months old on January 26th, 2018, a day we will never forget.

He was admitted to the pediatric intensive care unit at University of North Carolina Children’s Hospital. MRI’s, MIBG and bone marrow tests were performed, and it was revealed that he had a massive abdominal tumor, as well as disease throughout nearly every bone in his body. The bone marrow was over 95% full of neuroblastoma. His biopsies also came back with MYCN amplification and unfavorable histology, which meant an even more aggressive form of the cancer.

As he struggled in the PICU to remain stable, the surgeon at UNC said she would not operate on his tumor because it encased major arteries, and she didn’t know how much it was likely to shrink from chemotherapy. This led to us researching and finding out about Dr. Michael LaQuaglia at Memorial Sloan Kettering Cancer Center in New York City and Band of Parents.  Band of Parents led us to a phone call with Dr. Modak, who said all of Luke’s troubles with remaining stable were likely to be transient as his tumor was responding wildly to the chemotherapy.

Luke remained at UNC for 5 rounds of chemotherapy, and then traveled to NYC and MSKCC for surgery. His tumor had responded nicely, and after an 8-hour surgery, Dr. LaQuaglia removed all of the disease he could see, and believed he got all of the tumor. A week later, Luke had a 6th round of chemotherapy, then went home for a month to recover and enjoy a beach week with his cousins in North Carolina.

When we returned to MSKCC for scans, Luke was no evidence of disease!  He had a complete response to induction chemotherapy and his surgery was a total success. After some time off, Luke began the Hu3f8 anti-body immunotherapy clinical trial, funded by Band of Parents. Luke completed 4 rounds over the next few months, and when he had his next routine, 3-month scans, a small pebble-sized tumor was found in his brain. Fortunately, it was at the front of his brain and sitting on top, so Dr. Greenfield, the neurosurgeon at MSKCC, was able to remove it all, completely.

Luke’s relapse meant he had to begin a whole new protocol for central nervous system (CNS) relapses. After his brain surgery, he completed a week of chemotherapy, followed by 17 rounds of full craniospinal radiation to his brain and spine. Following this, Luke received a high dose of two chemotherapies. Upon completion of this, he was scanned again, and he remained no evidence of disease. At this point, Luke started a clinical trial known as Omburtamab. This was an intrathecal radiolabeled antibody injected directly into his brain. This has been the only known curative treatment for CNS relapse.

After receiving two doses of Omburtamab, he once again moved on to 5 rounds of immunotherapy and this time successfully completed all of them, remaining NED. He then had to complete 6 months of a low dose oral chemotherapy at home to complete the protocol. After that, we opted to put him on MSKCC’s vaccine trial for neuroblastoma, also funded by Band of Parents, which he successfully completed in the summer of 2021.

Luke has now been NED for nearly 3 ½ years from his brain relapse. He welcomed a brother, Carter, into the world in May of 2020. Carter’s young life was not without a challenge as well.  Carter was diagnosed in utero with Congenital Diaphragmatic Hernia. He had a hole in his diaphragm that allowed his stomach and intestines to migrate into his chest cavity. He needed to be intubated immediately upon delivery and had surgery to repair this at 5 days old. He was very fortunate that he had no heart issues, and that only his left lung was damaged, and was only about 40% of its normal size. He is expected to live a normal, healthy life.

Luke is a very happy and intelligent 5-year-old, who loves his transitional-kindergarten class, being outside, especially exploring nature on a swing set, and anything involving space or trains!  Carter is an energetic and happy 22-month-old who loves being around his family and playing whatever they are playing. We are very thankful to everyone along the way who supported us, prayed for us, and helped us in so many ways, including Band of Parents.

If you haven’t donated in a while, this would be a great time to support Band of Parents and help them continue funding life-saving clinical trials such as the neuroblastoma vaccine trial, that is dramatically helping to keep children in remission longer. 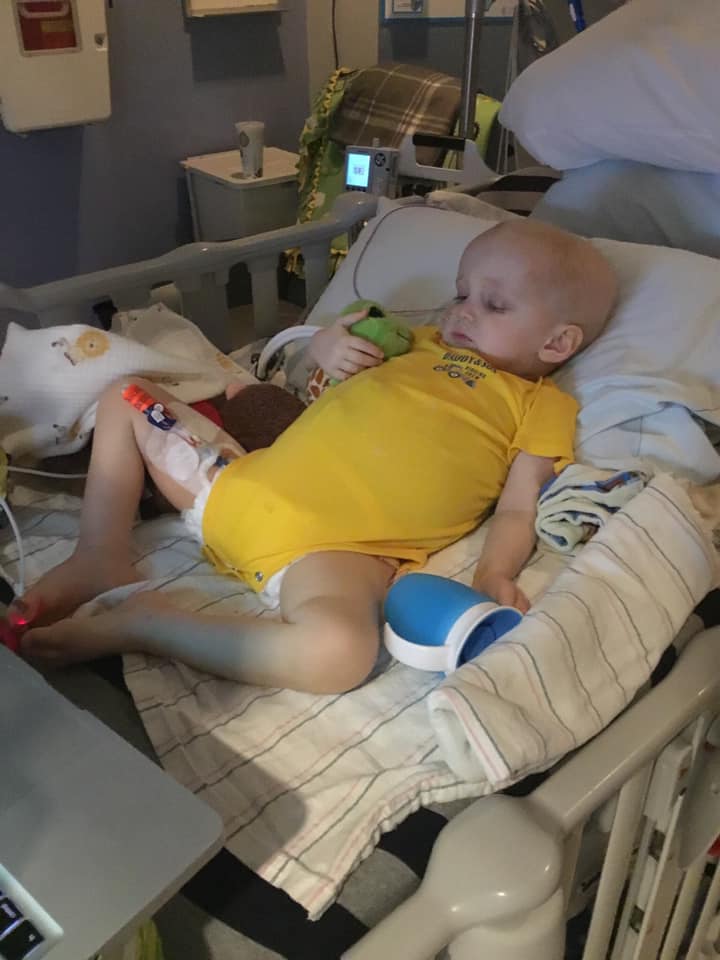 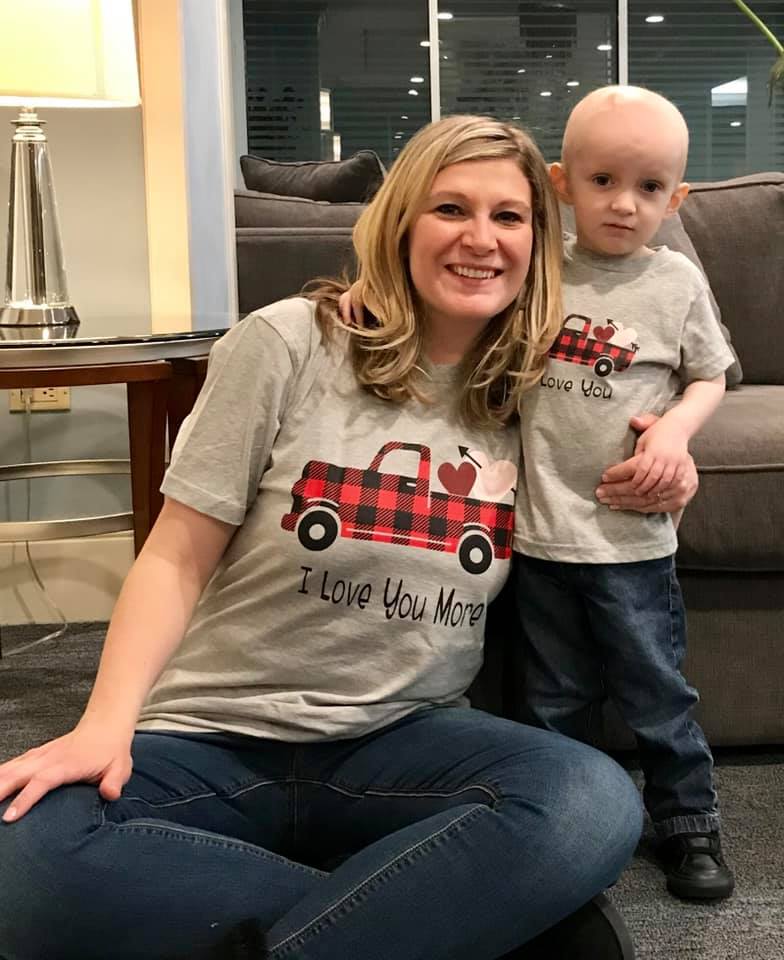 Donate in honor of Luke Liedy!